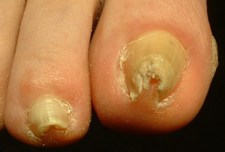 The incidence of onychomycosis has been reported to be 2-13% in North America. Studies in the Canada, United Kingdom, Spain, and Finland found prevalence rates of onychomycosis to be 3-8%. Onychomycosis affects persons of all races, and it affects males more commonly than females.

Toenail fungus usually occurs because socks and shoes keep the toenails dark and moist, a perfect breeding ground for fungi. Nail polish and fake nails (plastic or acrylic) can trap moisture and fungi in fingernails.

Nail fungus can be embarrassing and even painful. One Stop Procedure Clinic is the pioneer and the leading provider of  laser treatment for nail fungus in the Minnesota. We use the new generation of laser devices, which provide painless treatment with a high success rate in eliminating nail fungus.